Jesus, the High Priest, and Worship

Catholics have largely ceased to talk about worship. Some have relegated it to just a style of music and prayer ("praise and worship"), or assumed it is just a feeling we might sometimes feel in private prayer (like thankfulness), or have just abandoned it altogether as an unmodern idea. But at every Mass we worship the Father because we are in the Son, and so his high-priestly worship—on the cross and in the heavenly sanctuary—are our worship. We are "sons in the Son", therefore we are "priests in the High Priest".

33rd Sunday of the Year, Cycle B

Jesus, the High Priest, and Worship

The last few weeks I have been, unintentionally, ignoring the 2nd reading

And an angle we don’t get a lot: We get tons of Paul... and some John and Peter

Brothers and sisters:
Since we have a great high priest who has passed through the heavens,
Jesus, the Son of God,
let us hold fast to our confession.
For we do not have a high priestwho is unable to sympathize with our weaknesses,
but one who has similarly been tested in every way,yet without sin.
So let us confidently approach the throne of grace to receive mercy and to find grace for timely help.

The author of Hebrews doesn’t just focus on Jesus as king, but heavily on him as priest. He also see the Ascension as not just Jesus leaving us, promising the Spirit, and then waiting to come back at the end of time. He sees the Ascension as the moment the real High Priest enters the Real Sanctuary. And this is why he can intercede for us at the throne. That’s a priestly role, not a kingly one.

Then, 30th Sunday, quotes Psalm 110 twice. A psalm of the Messiah as king but also the priest:

it was not Christ who glorified himself in becoming high priest, but rather the one who said to him:
You are my son: this day I have begotten you;
just as he says in another place:
You are a priest forever according to the order of Melchizedek.

We hear about Melchizedek in Eucharistic Prayer I. Jesus is a priest, but not in the line of the Aaron and the other Levites; remember he is from the line of David (tribe of Judah), but the author says he’s a priest in the way Melchizedek was, who was also a priest and a king.

Now, jump ahead to 32nd Sunday:

Christ did not enter into a sanctuary made by hands, a copy of the true one, but heaven itself,
that he might now appear before God on our behalf.
Not that he might offer himself repeatedly,
as the high priest enters each year into the sanctuary with blood that is not his own;
if that were so, he would have had to suffer repeatedly from the foundation of the world.

Hebrews says that the sanctuary Moses made with the desert tabernacle and that Solomon made in Jerusalem were just rough copies: Moses saw the real heavenly sanctuary and is told to imitate it. But at the Ascension Jesus goes into the real and better sanctuary and offers himself and his worship.

And “Not repeatedly”. The high priest would go through the veil (remember this phrase) into the Holy of Holies once a year on Yom Kippur, The Day of Atonement, to sprinkle blood and say the sacred name. But that doesn’t actually take away sins, so he repeats it yearly. Jesus only offers himself once. Protestants sometimes accuse Catholics of thinking we are re-sacrificing Jesus every time we are at Mass. No. There is one sacrifice, but we come back to it again and again.

Every priest stands daily at his ministry, offering frequently those same sacrifices that can never take away sins.
But this one offered one sacrifice for sins,
and took his seat forever at the right hand of God;
now he waits until his enemies are made his footstool.
For by one offering he has made perfect forever those who are being consecrated.

Here we hear again about the once-for-all sacrifice and Jesus’ intercessory role. And then the line about the footstool brings us back to Psalm 110 again.

So now, let’s take all that and see how it is all brought together in a hymn, “Alleluia, Sign to Jesus” (half the Mass had this one this weekend). #732

Alleluia! King Eternal,
Thee the Lord of lords we own;
Alleluia! born of Mary,
Earth Thy footstool, Heaven Thy throne.
Thou within the veil hast entered,
Robed in flesh, our great High Priest;
Thou on earth both Priest and Victim
In the Eucharistic Feast.

Hymn is saying, this Eucharistic feast is also a sacrifice

Veil is in temple, separating the main sanctuary inner Holy of Holies

One sacrifice, offered once for all, by a perfect priest who is also the messianic king

Jesus’ sacrifice has done all these things, which the previous priesthood and temple worship could never do

Why did we just do that scripture search?

What Jesus did on the cross wasn’t just this great act of love.

Wasn’t even just an act of self sacrifice for sins.

Or even an just example of how we have to empty ourselves in humility.

All those, but also an act of worship

Notice the difference: old temple in Jerusalem built on the Temple Mount was filled with these Levitical priests, offering burnt sacrifices of lambs and goats, bull and turtles doves

A hill outside the city

And a different kind of sacrifice:

Not just animals that are offered again and again as a reminder that we are sinful, but himself who is able to actually remove sin

So Jesus on the cross is not just a reconciling, make-up-for-sins sacrifice with God, but also worship

I think “worship” has largely disappeared from the Catholic vocabulary. Or at least had its meaning narrowed to match non-catholic ideas about worship

I had an elective in school called the inter-seminary seminar: four students from Catholic, Baptist, Lutheran, Presbyterian, and Moravian seminaries

Myself and another seminarian were in the group that had a paper presented by a Presbyterian on worship, focusing on the kind of music chosen in services.

All we two did was just follow their lead: songs, prayers, postures, instruments….

At the end the Lutheran professor present asked: “How did you have an hour long convesration with two Catholics in the room and we never once heard mention of the Eucharist?”

Oops, we messed that up!

We had given up on the term “worship”

And maybe even the concept of worship

Even we as seminarians

We would’ve probably said if asked what we do at Mass: Well, you go to pray.

Or we would’ve said, and essentially did say, that worship was this individual thing that a person may do at the Mass.

Or worse, we might have just relegated it to being a feeling, like praise or thanks sometimes are treated.

But that is not what the Christian tradition tells we are to do: to only give thanks when we are feeling thankful, or to praise individually when are hearts are full of praise.

When we come together we DO praise and thank and worship together—objectively—and hopefully as a result of doing it we begin to feel the feelings of praise and thankfulness.

Some years back Miss Manners was asked by a parent if they should make their kids write thank you letters for gifts if the kids didn’t real feel thankful for them. MM insisted yes. We don’t write them because we feel particularly thankful. She said something like: I have written thousands of thank yous, and I hope that eventually writing them will make me be as thankful as what I wrote. We write them so we can start to grow into the feeling.

CS Lewis says something similar about our Christian virtues. We don’t need to feel courage to love or faith. We do the actions in the hope that the feeling will come along later.

Same with worship. We do it (and praise and thanks) so that the feeling of those will eventually catch up to what we are doing.

That is one of the reasons I have enjoyed this past year of us praying together with the priest ad orientem.

Because, again, those are individual things.

But it helps us get a sense that we are worshiping

Regardless of how we feel today

And we can do this because are In Jesus

That’s the whole thing we are trying to clarify, we are worshiping the Father in Jesus.

His worship is our worship.

Here’s the Trinity <triangle of fingers> Father, Son, and Spirit.

Sin divides us from God. There is a chasm there. And we are on the other side.

So while we are still sinners, the Spirit swoops down, and scoops us up, and puts us—through baptism—into Jesus.

We are in Christ. Whatever relation he has to the Father and Spirit, we have.

That is why we are “Christians”

Because we are in Christ

In Jesus, worshiping the Father with Jesus

This last week I was asked a question about this on the internet. Someone had read my homily on ad orientem and asked: “But why do that? Surely Jesus didn’t have his back to the apostles at the Last Super.”

In fact, that was Martin Luther’s point

Jesus was of course facing them at the Last Supper

It i the LS meal, but it is also Christ on the Cross and Hebrews description of Him entering heavenly sanctuary and offering his sacrifice and worship

Luther’s point was “The eucharist is just a meal”

“There is definitely not sacrifice happening at Mass”

“What happened on Calvary, and what Hebrews is all about, is not what is happening at Mass.”

“Catholic Church is crazy for thinking Mass is a sacrifice.”

We of course disagree with him.

Your Czech ancestors resisted German Lutherans trying to tell them for 400 years “It was just a meal. Face each other; it’s just a meal.”

My Irish ancestors resisted English trying to tell them for 400 years “It was just a meal. Face each other; it’s just a meal.”

But this is a secondary topic. The main point:

When we come together at Mass, yes, we do pray individually, and we do have or individual moments of praise and thanksgiving...

But it’s main thing is that we are worshipping

We are standing with and in Jesus, worshipping his Father

And I think we have largely lost that in recent decades, including myself and that other seminarian

So, the Letter to the Hebrews is a thing we need to revisit from time to time to remind us why we are here.

Not just to be chummy, not just for fellowship, not here just to be a family

But to be a family that worships, adores, praises, love, and honor

And we do that with Jesus and in Jesus the way he did that on the cross and the way he does when he enters that perfect sanctuary in heaven. 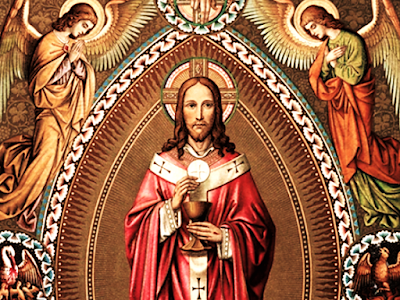