A Calvary Requires A Christmas

God wills our good. But we are dumb. God loves us intensely. But we can hardly see it. God doesn't need, or really even care about, our sacrifices. But we can't figure out that what He really wants is a humble heart—a will—that loves as He loves. The author of the Letter to the Hebrews is saying the Son of God took on a body, became incarnate, was born at Bethlehem to remedy this: With a body, we can see His generosity and good will, we can see his love on the cross, we can understand what a heart that comes to do the Father's will looks like. So you need a Christmas to you can have a Calvary.

A Calvary Requires A Christmas


For today’s homily we’re going to look at the second reading, the Letter to the Hebrews. And I won’t lie, this reading feels a little out of place. So here we are, it’s the Fourth Sunday of Advent, we’re a day and a half from Christmas, and finally things are really, really Christmas-y. At the beginning of Advent, you don’t always get a super Christmas-y feel; it’s more cosmic that Christmas-y. We’re talking about Jesus’ second coming, we’re talking about being prepared for both His comings, and there’s a lot of stuff going on. And as little kids, it’s hard, because we instantly want angels and shepherds, but nope, the first couple of weeks slowly tease us and let us gently move forth in that direction. So by the Fourth Sunday, we are in all out Advent assault on Christmas, we’re ready. We’ve got the first reading talking about Bethlehem, the smallest of the clans of Judah, and that the ruler will come from there, “therefore the Lord will give them up until the time that she, who has to give birth, has borne” that one- It’s very Christmas oriented. The Gospel is Mary and Elizabeth with babies in their wombs, and John’s jumping up and down, he’s excited that his Savior has come to his very own door. It’s very Christmas-y.  But then the second reading feels a little odd then, because it’s the letter to the Hebrews. And I think we had the Hebrews two months ago- it’s a lot about the temple and priesthood and animal sacrifices and stuff like that. And that’s a little out of place. It might seem to fit better with Eastertime, or Good Friday or Holy Thursday, because it’s focusing on that sacrificial aspect. And even the part we read here does that. But I think we will see here that it does fit perfectly with the fact that we’re right on the cusp of Christmas. So, what does it say?

"Brothers and sisters:
When Christ came into the world, he said:
"Sacrifice and offering you did not desire,
but a body you prepared for me;
in holocausts and sin offerings you took no delight.
Then I said, 'As is written of me in the scroll,
behold, I come to do your will, O God.'"

That is a direct quote from Psalm 40. So here we have the author of Hebrews, in the New Testament, quoting at length Psalm 40 from the Old Testament saying “this is why Jesus came.” And it’s an interesting sort of thing, because at this time we always focus on a helpless little baby, it the womb and in the cradle, but before that happened, God, the second person of the trinity, with all the knowledge, power, and fullness of divinity, made a choice to enter into our world, and He puts on His lips Psalm 40. I don’t expect that we should think that little baby Jesus came out of the womb singing Psalm 40, but these are the words that He had as He “came into the world.” Luckily in the next paragraph the author explains why he says that, why he brings this up, and why Psalm 40.

“First he says, "Sacrifices and offerings,
holocausts and sin offerings,
you neither desired nor delighted in."”

This is a funny thing about Psalm 40, and a couple other psalms do this same thing. God, in the Psalms says, “I don’t need your sacrifices. I don’t need these bulls, goats, rams that you bring here. I don’t need them. I don’t eat them. I’m not hungry. And if I were hungry, I wouldn’t tell you. You’re not bringing animal sacrifices to make Me happy or because I need them; I’m telling you, you need to do them, because you need to give them away. When you have a prize ram in your flock and you give it away, that does something good for your heart. When you give away the first fruits of your field, that’s good for your heart, but I don’t actually need these. The sacrifice isn’t to make Me happy, it’s to make you better.”

And yet, we know that God laid up the sacrifice system in the Old Testament, and we know that Jesus, going back to our Holy Week idea, actually does fulfill that. He becomes the Lamb who takes away the sins of the world. He is slaughtered on the cross at the moment that the lambs are being slaughtered in the temple on Good Friday, on the Day of Preparation. He fully enters into that. But we have to flip it- we have to realize that He’s doing it because we need it, not because God needs it. But then look at the next thing He says about the sacrifices:

“These are offered according to the law.
Then he says, ‘Behold, I come to do your will.’”

That’s the interesting part, because Psalm 40 says “You don’t need those sacrifices, you need someone who will do your will.” And this follows the Psalms in other places, it’s more about where our hearts are at, the choices we make, our hearts being broken and contrite, our hearts being humble before the Lord, that’s the real sacrifice. The sacrifice of humility that God wants, not just more and more piled up animal carcasses.

But the guy in Hebrews is saying the important part:
“’Behold, I come to do your will.’”
He takes away the first to establish the second.
By this "will," we have been consecrated
through the offering of the body of Jesus Christ once for all.

Now we understand why this is a Christmas reading, God loved the people of the Earth, especially Israel. If God is just God in the heavens without a body, it’s hard to see what that looks like. But when God, the Second Person in the Trinity enters into our world, enters into time, and comes to Earth, He takes on a body forever. But the Father doesn’t have a body, the Holy Spirit doesn’t have a body, and the Son didn’t have a body until the Incarnation. God can say He loves us, He can really love us as no one else can, but we’re kind of slow, it’s hard for us to understand. How do you know your mother loves you? She does certain things for you. How do you know your father loves you? He does things for you. If your sibling breaks their chocolate Santa in half and gives part of it to you, you know that they love you- it’s a sacrifice. And if there’s no body, if it’s not in the material world, it’s hard for us to understand love and sacrifice. God loves us forever, but still, we’re kind of slow, so what happens?

“Sacrifices and offerings you desired not…but a body you prepared for me.”

God says “I come in a body so you can see this love aright. I come in a body because I will make sacrifice. Not because sacrifice is something that I need, but so you can see it.” We need to see it, we need to witness it. We need to experience a love that isn’t selfish but is selfless. A love that gives itself, rather than taking for itself. A love that is generous and complete. That’s why God does this. So Christmas is the necessary condition of Calvary. You can’t have Calvary without Christmas. On the other hand, you have no need of Christmas unless Jesus is also going to His death and resurrection. But here we see these two holidays- these holy days- come together. We’re seeing that if you’re going to have a savior, you’re going to have the incarnation. And he might not come out speaking any words, but we’re told that from the beginning “I will show you that love, I will show you that generosity, I will show you that sacrificial love on the cross. So I’m going to come weak and small and as a baby, I’m going to take on a body, I’m going to be in your world, I’m going to be a part of humanity so I can take all of those broken things to the cross, heal them, and bring them all back to our Father.” 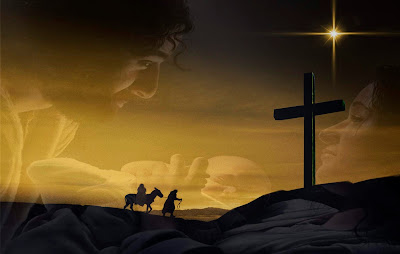