Misfiring Shots Heard Around the World

The Fourth of July ticks me off. Not because I dislike America, but because I like the truth. Really what I dislike is how some Americans act on the Fourth. I know a lot of the dumb stuff said around this holiday is tongue in cheek, things like, “Dear Britain, <bleep> yourselves! Love, America.” I know it’s good to let off some steam alongside the bombs bursting in air. I get it that when you’re the superpower and a lot of countries want to play David to your Goliath it feels good to remember when you were still the underdog. Cool. But if we’re going to play American independence like we’re a teenage kid getting pissed off at Dad and punching him in the front lawn before taking off to follow our own hopes and dreams, let’s notice that literally no son has ever looked more like his dad than the USA does. If Great Britain was seen as the blustering, arrogant, bullying empire of the 18th and 19th centuries, then it should come as no surprise that the U.S. owns that title for the 20th and 21st ones. And if America is “exceptional”, we should realize it’s largely due to the exceptional political heritage of the nation of England.

This is hard for me to write. I love my country and I love its story. I’m a history junkie and I love great epics. I love heroes. I spent my high school years devouring stuff on the American Civil War because it seemed to me the great modern Iliad: one culture, two peoples, two armies, heroes and villains, cowards and common folk. I literally was so devoted to the idea and object of America that when my reversion back to practicing the Catholic faith took place in 1995 I struggled with giving myself fully to God out of fear that it might someday put me athwart my homeland. I was a literal “My country, right or wrong, my country” kind of patriot. And like many Americans I believed we were exceptional. If not specially blessed by God, then at least we were the proud, brilliant inventors of rights, liberty, and democracy. Little did I realize that in the 1770s nothing could be more thoroughly English than the rhetoric of Patrick Henry, the militias of Boston, and the documents that came out of Philadelphia.

That word “English” needs some explaining. My constant frustration with the American historical mindset is that we (and not just Ron Swanson) tend to think that human history began in 1776. Most of us can’t explain why we speak English but that our Revolution was against “the British.” Quick historical summary: The Anglo-Saxons settled in the land south of Scotland and east of Wales and that nation became known as England. When Elizabeth I died in 1603, her cousin King James of Scotland became the ruler of England too. The 17th century saw horrible wars within and among all the nations of the British Isles, which through a long and tortuous road ended with the Treaty of Union in 1707 making Scotland, England, and Wales, into a single realm, Great Britain. In 1800 Ireland was added, and they called that realm The United Kingdom. This is important because while in 1775 the Minutemen were firing on the red-coated regulars of Great Britain, the American statesmen were quoting, often verbatim, the arguments of the English Civil War, the political cataclysm of the mid-1600s. To quote Simon Schama on Boston and the Stamp Act: “The problem for [British Prime Minister] Grenville, did he but know it, was that he was making trouble for the best-read smugglers in the world. And what they read was history—English history, the epic history of English liberty.”

We were taught in school that the American Revolution was about “No taxation without representation”, but who invented that rallying cry? Not John Adams, but John Pym and John Hampden, the heroes of the Long Parliament in 1640. I was taught (and will still hear conservative broadcast personalities say) that our Amendments for bearing arms and against quartering soldiers were added because of “the tyrannical things King George did in Boston.” Well, maybe he did, but the America founding fathers knew those things were tyrannical because people had suffered them throughout the 1640s and 50s in the successive tyrannies of King Charles, Parliament, and the New Model Army.

These 17th century English principles stoked the American grievances of the 18th century. Four months before Lexington and Concord, William Pitt the Elder stood before Parliament and declared that the colonies were not rebelling against English law but were rebelling in order to claim their rights within English law: “This resistance to your arbitrary system of taxation might have been foreseen: it was obvious […] above all, from the Whiggish spirit flourishing in that country. The spirit which now resists your taxation in America is the same which formerly opposed loans, benevolences, and ship-money in England: the same spirit which called all England on its legs, and by the Bill of Rights [of 1689] vindicated the English constitution: the same spirit which established the great, fundamental, essential maxim of your liberties, that no subject of England shall be taxed but by his own consent. This glorious spirit of Whiggism animates three millions in America; who prefer poverty with liberty to gilded chains and sordid affluence; and who will die in defence of their rights as men, as freemen.”

Catch that? The English Bill of Rights was in existence a hundred years before the American one. Now, what about that most glorious of Constitutional Amendments, the First, which assures freedom of religion, speech, press, and assembly? It is true that the American fathers expanded it beyond what had been promised in its English predecessor. In America, freedom of speech was granted to all citizens, not just to lawmakers in debate. Freedom of religion was given—not just to all Protestants but to all men. It is often pointed out that Jefferson, Adams, and Madison got their ideas from Hobbes and Locke, but what we don’t get told is that what got Hobbes and Locke reflecting on liberty and governments was the tumultuous half century of 1640-90. In the freedoms of religion and speech, we see the American framers going further, perhaps because they could see the need to respect consciences (especially since many were from Puritan families, dismissed from Britain in the 1660s) and perhaps because after two hundred years of wars of religion in Europe they saw it as the only way to safeguard peace.

What then is the United States but an end product of England’s attempts to define personal liberty and self-government? America, what did you hurl in Britain's face but his own promises of natural rights that you felt he had failed to keep? Certainly America has not stayed put in the last 239 years, and neither has Britain, but this spirit of liberty is not our divider, but our common heritage. Another time I would like to look at how the English emphasis on liberty and the French emphasis on equality are the two great competing streams running through American thought in the last two centuries, but for now I just want to say thank you to the United Kingdom for educating us in liberty and training us how to live in independence.
P.S. Dad, when we turn a quarter millennium, can we borrow the car? 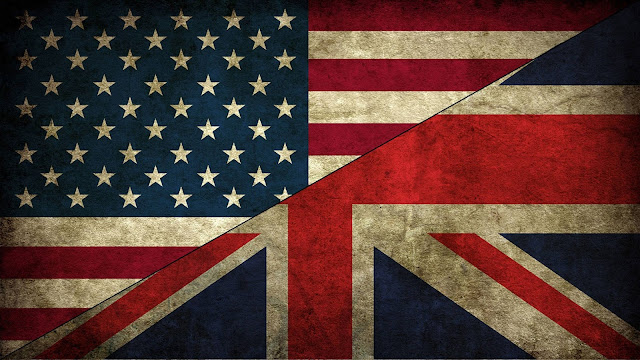