The Gospel **Is** the Tradition

"I handed on to you as of first importance what I also received..." If the rest of 1 Cor 15:3-5 is the tightly compressed summary of the Christian story—that he died for sins, was buried, was raised, and was seen—then this introductory line tells us quite a lot too. 1) This is of first importance; this is the stuff you need to know above all else. 2) Paul handed it on to them, first in person, now in this letter. What he is reminding them now (verse 1) is the gospel he had preached, and the verb for "handing on" is where we get "tradition", just like in "Therefore, brothers, stand firm and hold fast to the traditions you were taught, whether by word of mouth or by letter from us." The gospel, the good news, the tale of the paschal mystery, is the Apostolic Tradition that we hold fast to and build our lives around. 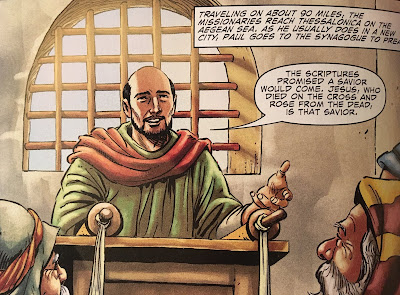 1st Corinthians chapter 13 is one of the most widely quoted passage of the Bible. Some sentimentalize it. Some write it off as cliche. But if we give it the right kind of look, we can find amazing treasures in there.

Today I want to look at the second reading.

Last weekend I gave only the most passing glance at the second reading.

My main topic was Catholic Schools, and if you weren’t here for that one, I would encourage you to look up the audio of that one on the parish website or on my blog.

This, today, is 1 Corinthians chapter 13.

This is St. Paul’s great “hymn to love”

This, or parts of this, have been read at countless weddings,
quoted in letters,
embossed on greeting cards.

It IS St. Paul at some of his rhetorical best

But it’s not just magnificent poetry and sentimental words.

1 Cor 13 REALLY is both a beautiful exhortation, and high theology besides.

So I’m going to make about 4-5 points

So start by going backwards

Let’s see where we ended because, while today’s reading is mostly chapter 13, the first verse comes from the previous chapter, ch. 12,

and of course chapter breaks are artificial: they were added much later.

For Paul this is just a straight continuous thought.

Now again, last week, I just had the readers read the short version of the second reading, so we didn’t go into the details.

But if you scan it quickly, you will recognize it’s the famous description of the church is the body of Christ, and how the body has many parts, all of which act differently, and or necessary and unique.

So, “Should the ear complain that it’s not an eye?”,

Or “What would happen if the body was all hands and no feet?”

This is Paul talking about how we are all One,
but we have different gifts.

And you’ll notice that the last couple of verses here are him talking about the different gifts that people might have in the church.

And he names some of them:

OK now turn back to page 54, because that is literally the very next line. There are no words in between the end of that in the beginning of today’s reading

So Paul has just given a long list of gifts, and he’s even given what seems to be a ranking of them in terms of power and prestige.

But then he suddenly turns a sharp corner.

Here is he saying: “yes, strive for the greatest spiritual gifts…”

“BUT I shall show you a yet more excellent way”

More excellent than being an apostle?

The way of love.

Leads us to point 2

The structure and flow of Paul’s thought in this chapter is flawless.

He begins by saying there’s something above these great gifts.

And then before he even names it—before he tells you that it is “love” he is thinking of—he starts by naming things we might think are better.

“If I speak in human and angelic tongues,
but do not have love,
I am a resounding gong or a clashing cymbal.”

Without love, I would be just noise.

In the previous chapter he has just talked about people thinking that the ability to speak in tongues was a great gift, but that’s the gift he “shows up” first.

And also realize, he has just thrown himself under the bus—because what is Paul’s greatest skill? Speaking.

That is his superpower.

He is a noisy gong.

And what if even the angels taught him to speak their language?

Next up: 3 gifts
Prophecy—like a mystic
Understand all the mysteries—like a church doctor
Faith that can move mountains....

But if I do not have love, I AM NOTHING

It’s interesting: we don’t need to have Martin Luther arguing with the Council of Trent over the question of faith alone,

or pit St. Paul in Romans against St. James on faith.

Paul himself says right here: a person with “even faith so as to move mountains, it he doesn’t have love, is nothing.”

You have faith?
Good. Now show it in love.

And notice he keeps going up the ladder:
Tongues—lower level
Prophecy and theology—getting jogger
Last one—presumably the highest: “hand over my body”

A reference to martyrdom

It gains me nothing

Point 3: As we move on to the most widely quoted part of the passage, let’s pause and ask:

what is this love we are speaking of?

It’s pretty obvious that the kind of love that Paul is talking about here is not merely the love we have for ice cream, or a TV show, or puppy love or any kind of merely passing emotional burst.

It’s not a crush.
It’s not infatuation.
It’s not “Stan-ing”.

It’s a love that will lay down its life.

It’s a love that can extend to strangers.

It’s a love that can even extend to enemies and persecutors.

You have probably heard that in Greek there are several words for love, whereas in English we just use one

There are words like philia, from which we might call some one a bibliophile—a book lover. Or a Francophile—someone who loves all things French.

And you probably know that the word here is “Agápe”

But it’s not like there was this Greek word just laying around meaning all those deep, selfless, unconditional, sacrificial things.

No.
The apostles had to PUT those ideas in there
as the translated the story of the Hebrew God
and the Hebrew Messiah
out into a Greek.

The old Greek Agápe had a sense of: cordial, pleasing, affectionate, warm, gracious

That was the seldomly-used Greek word that the Apostles picked up to try to describe how:
God was acting a certain way to us,
and Jesus acting that way back to his father,
and that action would take him to his death,
and it was the thing that filled the new Christians.

But THEY filled it up with meaning.

With John constantly telling us about the this Agápe that Jesus and his Father have for each other,

And since Paul wrote most of his stuff before the gospels, we cannot doubt this famous paragraph here might be Paul trying to draw together all the things he and the apostles meant when the talked about God’s Agápe which sought them out, and the Agápe which must animate them.

Like most priests, I see this passage a lot at weddings, but unlike some, I don’t think it’s cliche.

I mean, even if you take the most hardline “love is a choice, not a feeling” emphasis on the word, this I hard to beat:

That’s as fitting for the mom of a toddler, the couple on their honeymoon, the adult children taking care of a disabled parent, the friend with an open ear.

Some people feel they are mixed metaphors or confusing:

Other gifts shall cease.
I used to talk as a child.
We see and know now only partially.
FHL, & The greatest is love.

Actually looping back around to the first 2 points:

If you have to choose—choose love.

Of all the gifts you could pursue—pursue love.

If you have other gifts but don’t have love,
that was a bad call,
because those others will cease.

If we read this passage careful and take in the whole context, we realize...

He’s saying do those things, but never forget love.

Do them out of love,
With love,
For love.

Because that is the core, that is what will remain after your work is done.

And that was always a better motivation for doing them in the first place.

So I beg you,
when read or hear or think of this more-than-a-little famous passage:

Don’t over-sentimentalize it.
But don’t write it off as cliche.

Really is one of the best we summaries of the Christian life we have:

From the divine Agápe that first motivates,

to the final Love in which we are hoping to rest,

and all the loves we give and receive in between,

It really is a great exhortation to the greatest of all virtues.