This was the homily for all the Christmas Masses. I took an idea I had used before in Doniphan/Kenesaw about connecting the Nativity and the Eucharist and launched into it via two things on the Internet lately 1) a meme about keeping Christ in Christmas and 2) a tweet about Christmas services stealing pastors' kids' Christmases. Both of those are included below.

(Note: I know a meme is more than a picture, and I went into the distinction more in later Masses, but the 4:00 had the best recording, so don't @ me.) 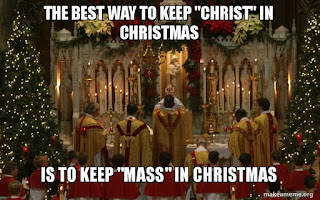 And the tweet:
Jon AcuffVerified account ‏@JonAcuff  Dec 20
Shoutout to churches cancelling services this Sunday. We pastor's kids often leave faith because the church stole our Christmas every year.

What to know about "O"

Homily for the 4th Sunday of Advent, the "octave" before Christmas, and the "O" Antiphons.

You're Just Not That Interesting

Last weekend's homily (Second Sunday of Advent): "Don't fear going to Confession to a priest; you're really not that interesting."