In the original homily where I introduced ad orientem at St. Wenceslaus I ended by saying I could have gone on for another ten minutes, but for time's sake I would share those ideas in different ways. And then with certain topics, like the question of sanctuary restoration, I said that I would save that and explain more in the bulletin.

So, in each of the bulletins since October 1st I have put in a little blurb, explaining more about ad orientem, sharing an anecdote from other places that have had it, or presenting things I had to skip in the homily. So today I am bundling the first four of these blurbs here for those who don't have a stack of St. Wenceslaus bulletins at home.

I. Last weekend I explained that for at least the next year, St. Wenceslaus would be celebrating Mass ad orientem, that is, with the priest and the people united, facing the same direction. If you missed that homily, or want to revisit it, visit the parish website. We have placed the text and the audio near the top. Over the coming weeks I am going to share here some of the insights that didn’t make the homily, but for the core reasoning, you’ll need to hear the homily itself.

A hard decision I had to make was whether to catechize about “AO” for weeks ahead of time, or just preach the one homily and then start at that very Mass. I was keenly aware that many of the changes in the ‘60s and ‘70s were done with minimal pre-teaching. But as some students noted, this was a far smaller change than the translation changes we had in 2011. So I decided it was better not to break things up and risk people having too much time to overthink it, talk to anyone else, or go hide in another parish. Instead, everyone heard the reasoning and then two minutes later we were all praying, facing God the Father together. So far almost every response has been positive, especially among young people. Thank you for walking alongside me in this pilgrimage!

II. In the homily introducing ad orientem worship, I said that I think praying this way will make us better prayers (pray-ers). Another thing it should do is free us from mixing up what parts are conversation with God and what parts are conversation with the priest. These ideas overlap in a conversation a priest in our diocese had with a woman in his parish after they started ad orientem. She said "Father, I feel free now. When you looked at us the whole Mass, I felt I needed to look back, as a courtesy and to show I'm listening. Now, in the parts where we are talking to God, I can close my eyes, I can look down. I don't feel I always have to look at you. I can pray naturally."

This makes sense to me. Most faithful Catholics want to show they are attentive, focused, listening participants. But for many that means sacrificing what might be a more natural posture and style of prayer because they feel they need to show the priest (and others) "I'm listening!" AO frees us to pray, without worrying about signaling the priest our attention.

III. A line commonly heard when discussing Mass ad orientem (or when discussing the pre-1965 “Traditional Latin Mass”) is that “Father had his back to us.” There is a lot more in that line than I can go into here, but I have done some research on this and, interestingly, that complaint is basically nowhere to be found in writings in 1950 or 1960. It seems to only appear after the priest was encouraged to face the people (1965-70), and is used by liturgists and catechists to open the people up to the change, e.g. “Isn’t this nice? Father used to have his back to you, but now he’s looking at you.” A priest in Lincoln a couple years ago turned the celebrant and server chairs 90°, from facing the people to facing inward, much like our chairs. A woman said, “Father, I’m upset because I can’t see your face anymore.” The priest replied, “Then, sadly, we were doing it wrong.” His point, and it applies to the Introductory Rites and the Eucharistic Prayer alike, was that Mass has never been about the celebrant, and should never be about him or his connection to the people. I understand how there was appeal in being told “Father won’t have his back to us any more,” but I don’t think the liturgists who first said it realized what clarity they actually already possessed and what confusion they were beginning.

IV. In the homily when I introduced ad orientem I asked a question, “Does this have anything to do with the building campaign/sanctuary renovation?” and my answer was “No… and a tiny yes.” That “yes” is: We should take some time with ad orientem before we have to decide about what kind of renovation we want.

I’ve talked to several priests throughout the country who restored sanctuaries and put beautiful, tall altarpieces in again. When asked if those additions changed much in the parish they all said some version of “Well, we get more weddings requests and more pictures on Christmas.”

I call this the “backdrop effect”, and we don’t want it. We don’t want to spend $50,000 on a pretty backdrop with no appreciable change in how we pray and think. To me, the backdrop effect seems sensible in Mass facing the people. When the priest is facing the people, the mental path goes between him and the people, and so the altarpiece is background. But when we are facing the same direction, the mental path goes from the people, through the priest, and on up and in. When we say Mass ad orientem, the sanctuary furnishings are organically more of a part of the worship. 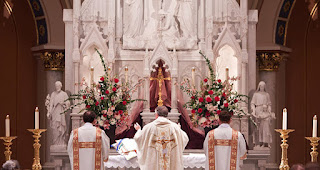