Christ the King: the Glory and the Challenge

Christ the King is either an amazing feast day or a total dud depending on how the priest, the parish, and those involved in the liturgy decide to "sell it". But lest we fear that celebrating the day with song and story, ritual and romance will somehow make us starry-eyed dreamers, the Gospel and its challenge will always bring us back down to earth.

When given the choice between poetry and prose, modern people think they always have to choose the prose.

Two things argue that—while modern man focuses on the practical and the explainable—it's not our natural setting as human beings.

1) Our love of beauty: the world of symbols and extravagance

2) Our love of story: the world of imagination and narrative

I focused on the world of beauty in the homily on "If I could have explained it, I wouldn't have needed to dance it."

And I focused in the second homily on how we live in a world of story—stories of sports seasons and of celebrities, of politicians, and the Bachelorette, and Netflix series.

These are what excite us, but we buy into our own self-created lie that we have to make everything rational and practical.

And I asked: "Have we Christians limited ourselves to prose, and then been annoyed that there isn't enough poetry in the world?"

I bring this all up again because whether the Christian life is poetry and beauty and narrative vs. prose and work and explanation means everything to this feast day.

If we allow ourselves the realms of song and story, of ritual and romance, then it's awesome how the Catholic Church closes out her liturgical year with a feast called Christ the King.

The imagery of starting anew each December, telling the story of anticipation leading up to birth,
of preaching leading to the cross,
of rising, ascending, and sending the spirit,
and then months of us laboring to build up his kingdom on earth, culminating in a feast of Jesus as King—king of every person, nation, and thing...

It's perfect. It's beautiful. It's a moment glory and triumph.

If it's just into a world of prose and practicality that we speak this feast, then there's nowhere to go with it.

It's the Sunday before or after Thanksgiving.

It's the Mass we attend when the weather's cold but the wreaths and candles aren't up yet.

Sometimes we've got a few extra kids home or we're at grandma's parish, but it's nothing on its own to make us think or wonder.

And why should Christ the King matter? We're modern. We don't have kings anymore. We have departments, agencies, and boards

But like I said: really our hearts want more; we've just been convinced that wanting that is "not acting reasonable, or mature, or realistic."

And yet Pixar and Dreamworks make billions of dollars.

I bring them up, not because they tell stories (though they do)

Nor because their stories often have kings (though they do)

But because people—even, and maybe especially adults—watch them and love them for their depth and the lessons they teach.

Cynical people will sneer that animated movies take what should be obvious lessons about life, about friendship, and virtue, and authenticity, and put the lessons in the mouths of singing animals and dancing elves and people act like it's something amazing.

And it is! Because when for 50 or a 100 years other cynics have complained that our books and movies and heroes need to be more "realistic", more gritty, more morally gray, then showing loyalty and sacrifice and courage straight up, can leave parents blubbering at “Up” or “Wreck It Ralph” or “Toy Story 3”.

We might be confined to live the work-a-day world in 2017, but our hearts and souls long for a better place, with deeper stories and more excellent virtues.

That's why in a sense we have to decide what Christ the King is going to be.

We have to decide if we can be moved by it.

We have to decide if it a story we want to be apart of.

Or just punch the timecard and be in and out in 50 or 60 minutes.

Celebrating Christ the King "like it means something" isn't just a practice in imagining gold crowns and white castles.

I'm not suggesting we just move into an imaginary kingdom of symbol and story on Sundays.

The gospel today robs is of that delusion.

Jesus tells us he will come as king and judge.

And he's telling us what the questions will be on the final exam.

And they're simple questions, but the teacher is a stickler and "you've got to show your work".

He is king, and we are his soldiers. He has a kingdom and we're invited to share in his glory.

But it's going to mean doing hard things.

And it's not just a matter of giving to the poor or donating money to the needy, though the parable certainly includes that.

It's also about our attitude.

And other things like the Sermon on the Mount and the other parables...

Because, how we think and speak also matters.

St. James in his letter warns us "despise not the poor"

Poor can be meant in many ways: wealth, talents, or intelligence, or beauty

Or we just don't think they are cool enough or fun enough to be around.

I’m going to tell a story on myself to illustrate this:

Once I got a call from a neighbor church. It was a different denomination and they had a woman with them who was looking for a hotel to stay in for a a day or two and wondered if I could help her out.

I said yes and we agreed to set up at a local hotel and I would take care of the bill.

Then about a week later I got a call on my cell phone. It was the lady that we had put up. This was a little frustrating already because it meant the other church had given her my cell phone number. After the hotel she had been at a homeless shelter for that week but was wondering if she could return to the hotel for one night so she could get things worked out with her daughter who was driving in to pick her up and take her home with her.

I agreed and called the hotel and said that the lady would be returning and that we would cover it, and to just put it on the the bill from the previous stay. So just bill us for the three days together then.

Then, about three or four days later, I got a call again on my cell phone from the lady I had helped, and she was wondering if she could get another day's stay at the hotel. And I was like, "Uh. You're supposed to be in Montana. Where are you now?"

"Well, I've been here for the last 3 days. When I got here they told me to take this room."

I was so upset.

I was yelling. I was screaming in the phone, asking questions and accusing. I was so upset.

I felt taken advantage of.

I felt I had been hoodwinked.

I felt that the woman was not honest—to me or to the hotel people.

And I was just exploding in wrath at that moment.

I was even yelling as I was getting into my car to drive to the hotel and work this out. The woman had said again and again that the hotel said I was covering three days. This of course was crazy. I had already covered two days earlier and agreed to do one day after.

So I went into the hotel, still very angry, but of course I wasn't going to be angry with the people there. I was very calm and professional. One, because I assumed the woman had been dishonest with us both, and two, because these are people in the community that I have a relationship with and need to stay on professional terms with.

But... it turns out that she was right. There had been a real miscommunication and the hotel had thought I was saying that she was good for three days starting then, and that I must've given the confused impression that that was what I wanted.

So, I admitted my mistake, swallowed my pride and anger, and agreed to take the whole bill. I had messed up.

As I walked out of the hotel the thought that really ate at me wasn't the money or the miscommunication.

Those things happen. That's a part of life.

It wasn't even the yelling.

Not the best, but if you'd really been swindled, that might be kinda reasonable

It was the difference between my yelling at the woman on the phone and my kindness to the people at the hotel.

It wasn't remotely bad to be patient and professional with the hotel. To wait for explanations and sort things out.

That was the right thing to do.

What ate at me was that I didn't think to give that patience and kindness to the woman on the phone.

My presumptions with her were immediate.

I had, according to St. James, despised the poor.

Maybe you've been there too.

It'd be nice if we all could say, "Well, Father, we learn and we grow and hopefully you've gotten more patient with age..."

That would be nice.

I thought immediately of today's Gospel coming up: "I did everything the Gospel tells me not to do."

I sought of Confession, because I had entered into so pretty grave sin.

And for those wondering how things turned out: I did speak to the woman later and apologized to her.

One, because I'm guessing people can relate to it.

Two, because it's so easy to speak about living the gospel, and so hard to actually do it.

Yes, we have a king, but I don't think we need to worry that we are accidentally going to slip off into an imaginary land where we're all "Yay rah, King Jesus", and there's some perfect little kingdom, and that by making Christ the King a time of pageantry and song were going to somehow miss out on the real world.

The Gospel forces us back.

Don't worry, realists. There's never going to come a moment when we get too "heads in the clouds" about Christ the King.

So let's do both.

Let's dive fully into this feast, and celebrate and love him, and embrace it.

It is awesome that we wrap up the year with glory.

But then realize that that glory comes with hard work. It comes with demands.

There are things that we have to do to live up to that glory.

And we may fail in it from time to time.

But we will keep striving, because we want to be worthy soldiers of that king and his kingdom. 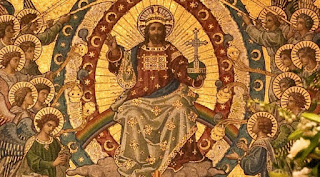