All The Baptized As Mediators

"Sorry, not sorry" here: Not only are saints mediators, but every baptized person is a mediator too. St. Paul's linking "one mediator between God and man" and "gave himself as a ransom for all" in this passage today clearly points to the cross, where we know Jesus stood as both the priest and the victim, the mediator and the sacrifice. We also know that Paul constantly connects the life of the Christian disciple to being a sacrificial victim with Jesus (Rom, 2Cor, Col,) And most importantly, we know that in baptism, a person dies and rises with Jesus and so becomes a part of Jesus, and thus becomes a priest, prophet, and king. Yes, there is another sacrament, holy orders, which creates ministerial priests, but both the ordained minister and the baptized Christian have only one priesthood, which is, of course, Jesus' priesthood. This is one of the cool things about ad orientem worship: we are already arranged like Jesus' physical body in a traditionally-shaped church (sanctuary = head, transepts = arms, nave = torso and legs), but in ad orientem, it's even more clear that we are all —minister and congregation—in Jesus, offering with Jesus, his own sacrifice on the cross to the Father. The ministerial priest leads all the baptized priests as head, standing "in the head" of the physical church Body, doing what he is ordained to do —but the Body is all one, because the Body is Christ. (And then this segue-ways nicely into reading the Bishop's Appeal for Vocations letter and asking people to give to help young men discern if the ministerial priesthood is for them.)

All The Baptized As Mediators


One of the debating points between Catholics and non-Catholic Christians is the question of "How do the saints work?" Like, ok, they're in heaven; people tend to agree on that. But like, "Can they intercede?" That's a big debate between Catholics and non-Catholic Christians. Catholics —you know— we turn to saints, we ask for the prayers, or intercession, their help, and stuff like that.

And oftentimes people respond back to us, who don't come from our tradition, and they say, "You shouldn't do that. There's only one mediator between God and man and that's Jesus and going to anyone else —any other saint, any other person, even the Blessed Mother— that's not ok."

And so sometimes you'll see Catholics trying to appease our non-Catholic friends say, "Well, ok, hold on. There's a difference between mediator and intercessor, right? Jesus alone is the mediator. We're only talking about calling saints 'intercessors'. We're making a distinction."

That's right. You are mediators between God and man. How can I say that? Because you were all baptized.

Just earlier today [Saturday] I did a baptism. And after your baptism, the very first thing we do after you are baptized and made part of Jesus —you died with him; you've risen with him; you are now part of Jesus; you are now incorporated into him— the very next thing we do is take that chrism and put it on your head and we say, "As Christ was anointed priest, prophet, and king, so may you live." May you live as a priest, prophet, and king. Every baptized Christian is a priest, is a prophet, is a king.

That priesthood is what we are talking about with a mediator, right? "There was one God. There was one mediator between God and man: the man Jesus Christ, who gave himself as a ransom for all." Jesus on the cross is the priest and the victim, the sacrifice and the mediator. He is both. So if you've died and risen with him in baptism, you've been baptized into his mediatorship because you're a priest also.

Now, I know that's weird, right? "Well, Father, you're the one in the funny little outfit today." True. Right, there is a difference between ministerial priests and baptismal priests. We know there's a distinction there. There's a distinction of another sacrament—Holy Orders. But every last one of you who is baptized is a priest of the New Covenant. You are a priest by your baptism into Jesus. Which means we are all mediators.

And that's part of, hopefully, the image we understand from the time we've been doing Mass ad orientem. The whole church is shaped like the body of Christ, right? It's got to a head. It's got kind of wings, which are the transepts, for your arms. It's got the whole rest of the body there. We are all in Jesus. We are all in Christ at Mass. We are all praying in him, through him, to the Father. That's what every single Mass is, whether we've got cool drawings or not. Every single Mass is doing that. So every single time, we are all —as Christians in Christ— worshipping the Father in Christ, because we've been baptized into him. We are baptized into his priesthood and into his mediatorship. That is something that we all share. Yes, there is again a ministrial priesthood and that's why there is a head to the body. And that's why I, or the other priests, stand at the head. But again we're all in Jesus, all worshipping the Father, all at the same time. That's what it means to be baptized into Christ.

Now having said that there are also ministerial priests —priests who serve directly at the altar; priests who do what I'm doing up here right now— it's a good day for that to be in the Mass readings, because today is also our kickoff to the Bishop's annual Appeal for Vocations (BAV). Starting next week, we're gonna actually have the seminarians come and they will speak at the Masses and then after that it'll be the first day of having pledge cards available, and chances for commitment and stuff like that. And I ask you can really take that seriously.

I now want to read you the Bishop's letter and in there you'll notice that he appeals to not just the priestly part, but the prophetic part: that we all are prophets because we're baptized; we all are priests because we're baptized. And then there are those who are set aside in a special prophetic-priestly role as ministerial priests. So the whole body of [baptismal] priests supports the making of new ministerial priests. Here's what he says:

Dear Brothers and Sisters in Christ,


This fall we begin the Diocese of Lincoln’s Bishop’s Appeal for Vocations, which annually raises money for the expenses of our seminarians’ education.  This year’s theme is “Anointed to Preach the Good News” (Luke 4:18).  Priests have been anointedto bear fruit, the abundant fruit of the kingdom.  As priests of Jesus Christ, they exercise the “prophetic role” of preaching the message of truth and salvation to a world that is in dire need of hope. In a culture where there is much bad news, the Gospel message is still the ‘Good News’ which brings the peace of Christ to each person.


Please consider giving generously to the Bishop’s Appeal for Vocations, in thanksgiving for the generosity of Jesus Christ and His Church.


This year, it will cost the Diocese of Lincoln 1.5 million dollars to fund the education of our 37 seminarians.  I am asking for your support to raise 1.2 million for our seminarians.  Your generosity is essential to training the young men who will become our future priests.


We live in a time when nothing less than heroic witness will be sufficient to proclaim the authenticity of the Gospel. Thank you again for your continual prayers and support.  Be assured of my continued prayers for you as well, that all of us may continue to remind our world of the Good News of our Lord.


Sincerely yours in Christ,

So notice how he ended that. He ended by pointing out that we are all prophets and priests, right? He says, "Be assured of my prayers [...] that all of us may continue to remind our world of the good news of our Lord.".

Again, we're all prophets. We're all proclaiming the gospel in a dark world, a world without hope, a world that oftentimes doesn't think that Jesus has the answers.

And again, [we are also] all priests. All bringing our daily sufferings, our sacrifices, our prayers, to the Lord —personally, at home, but most especially when you come to Mass— when we are all part of Jesus the priest, Jesus the mediator, bringing that before Lord.

But you do need a head, right? You do need someone who is the head of that body, who is the one at the physical altar. And so we do need to have new priests coming. You know, I hit 40 this year. I hope I live a lot longer, but I don't know. And don't make expectations.

The only way we get new priests is by having men willing to try the seminary. Some aren't going to stay. And, so yeah, you're going to have people that are going to discern in and  discern out and that's 100 percent ok. But we have to make it a place where they can come in safely and discern —discern in, discern out— safely. And yeah that means sometimes you spend money on someone who doesn't become a priest. But we need to give them that shot.

Give them your support. Give them as much as you can. Give them as much of your prayers, your thoughts, your attention—when you meet them, support them with your words, say "Hey I love what you're doing; thanks for giving it a shot. I sure appreciate that." Give them that as much as you can, so that they can discern if the Holy Spirit is calling them to be a priest at the head of the body so that we can continue to have the sacraments. Not just in this parish but in many more parishes, many smaller parishes, that otherwise would not be able to have priests. 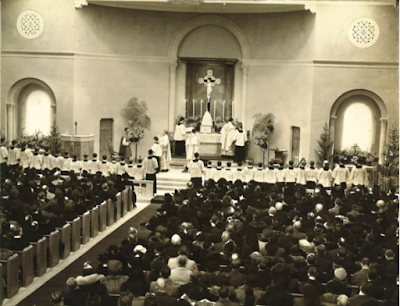