Time and a Timeless Mass

It's been an intense 10 days. A close friend lost her mom. I learned the next day that my Confirmation sponsor, who inspired me in so many things, had died suddenly. It was a busy ordinations weekend here, and this year those days mark off twenty-five years since I visited Nebraska the first time and chose to move here and become a seminarian. That also means that June 6th was the 25th anniversary of my class graduating high school. Oh, and a group of students we called "The Babies" when I was in college are now 40. And my parents are seventy-five now.

It has also been a year since my last blog post, which was my personal reflections on the full year that had passed since I started saying the Extraordinary Form of the Mass in addition to the Ordinary Form. And then today is the two year anniversary of my first time being the celebrant of a High Mass. Tick tick tick. Time makes itself heavily felt at every turn of life, it seems. And change too. Change of city, of time zone, of school building, of job, of state of life, of family size, of pants size, of vehicle, of technology, of medications, of aches and pains, of Presidents, of Popes, of hopes and dreams and worries.

I like history. I like people telling stories of their pasts. I like the little time capsules that books and movies and photos are. I like reminiscing with family and friends. I like remembering things. One of my Top Five strengths on Clifton Strengths Finder is "Context" because I always want things plotted on a timeline and I want to see how things connect over time. And while that's a strength, I'll happily admit that a weakness of mine is nostalgia. Not even in the sense of wanting to go back to something (I do not want to relive some 99.9% of my life), but just in the sense that I enjoy remembering things. I enjoy merely fishing for pieces of the past and trying to recreate scenes in my head.

I bring this up because some people assume that if you like the traditional form of the Roman Rite it is because you are nostalgic either for something you yourself remember or for some imaginary scene crafted by a graphic designer purporting to capture a bygone era, like depictions of 1950s families in their 1950s neighborhoods, or of the 18th century Scottish highlands, or of a medieval French village. Or people think that maybe it's just that you appreciate the Latin Mass as a slice of history itself, a peephole into a storied past. All of those theories imagine the Extraordinary Form as a conduit for nostalgia.

There is even a way in which a few adherents and apologists for the Old Form can rely on a positive spin of this theory in their advocating for the EF. I mean, we Catholics embrace tradition, right? We look to Scriptures written by ancient Jews to teach us, and to ancient Greek and Roman Church Fathers to unpack those texts. We see the unbroken flow of two thousand years of Church life as a key argument for why we today follow the successors of the apostles, instead of being, say, Baptists or Mormons.

So there can be a temptation to turn that positive spin into the argument in itself, i.e. Because the pre-Vatican-II Mass has been handed down with only small changes sometimes centuries apart, and has been prayed by billions of Catholics going back to Christian antiquity, and has good internal evidence that it may possess the oldest of all the Eucharistic canons, therefore it should be experienced and preserved and disseminated for those reasons primarily. Now, to be clear, the ancientness is a tremendous blessing: That it is fundamentally the same form of Mass since the time of Gregory the Great, and with a canon probably more than 200 years older than his pontificate, does resonate with us. But I don't think folks in some dioceses keep driving three hours round trip to assist at a traditional Mass do so just because it is the oldest blueprint for divine liturgy available, and much less so because they want to cosplay 13th century peasants for an hour before returning to their Suburbans and french fries and juice boxes.

What I am saying then is that both a negative "oh such nostalgia!" critique and a positive "oh such antiquity!" apologetic are seeing the phenomenon back-to-front. For comparison, Natural Law morality challenges Voluntaristic morality by asking, "Is murder wrong because the Bible tells us it's wrong, or does the Bible tell us murder is wrong because it is?" Likewise we can ask here, "Is the traditional Latin Mass a great good because it's been around for 14+ centuries, or has it been around for 14+ centuries because it is a great good?" I vote for the later. Its bright and lucid form are why it has received only the gentlest of tinkering over the centuries.

Bringing things back around to my second and third paragraphs then: Yes, the press of time and change are constant. But the attraction (at least for me) of the Latin Mass isn't one of nostalgia or of being a period piece or from claiming a very early copyright date. It is actually the opposite—it is its timelessness that is the draw. The old Mass was the same when the eight-year-old boy was learning to serve it as it was when eighty years later he celebrated his final Mass as a priest. I am 42 and there has been two major revisions to the 1970 Missal just in my adult life. The readings, the chants, the calendar of the usus antiquor could go centuries with no major changes. My grandma lived about fifty years with one form, forty years with a radically different form, and about five years in between those with two transitional missals. That which seeks to be up-to-date must always be updating; that which doesn't, doesn't.

The Extraordinary Form of the Roman Rite for me isn't about going back in time so much as stepping out of time entirely. I was taught and believe that the Ordinary Form lies outside of time too, but that is an objective truth that my brain has to struggle harder to accept when we just last year excised the "one" off of the "one God forever and ever" in the English translation, and had much bigger changes in the English in 2011, oh and now we can use Eucharistic Prayer IV on a Sunday also, and then we got some new reading options a couple years ago, etc.

And that's nothing compared to the much more time-bound fields of music and architecture and art. Even a total novice can usually identify whether a church is "1960 modern" or "1980 modern" or "post-2000 modern". That doesn't automatically make such things within the Mass promulgated by Paul VI and John Paul II wrong, but I think there's probably more nostalgia generated by hearing "Blest Be The Lord" and consequently remembering fondly the Masses at your elementary school than whatever nostalgia comes from hearing any of the Gregorian Mass settings, or even devotional hymns like Panis Angelicus or Salve Regina.

Now, I'm a priest so I know my experience at the Latin Mass is different from that of those in the pews. But when I talk to people who grew up with the Ordinary Form and later started going to the Extraordinary Form (especially to sung Masses) they consistently describe the experience as "almost otherworldly", and not as "somewhat-earlier-within-this-here-world-ly".

When hearing a high school girl who texts like other teenagers and wears modern fashions say to her friends, "Wanna come to Latin Mass with me? They're singing Mass XI today and that one always gives me goosebumps," you don't get the impression these people think of it like a quick trip to the Renaissance Fair. At a TLM one will meet single parent families, dual income families, college kids who study I.T. and exercise science and broadcast journalism—none of whom seem interested in time traveling to 1905 Catholic Boston for the day. They seem to think this Mass fits just fine into their modern lives.

Nobody seems to suggest that the Russian and Greek Orthodox liturgies are attempts to run away back to the first millennium. Even if Western Christians have only seen them in The Deer Hunter and My Big Fat Greek Wedding respectively, or YouTube videos of celebrity baptisms and intense Eastern sprinkling rites, their responses aren't accusations of escapism, but rather ones of genuine appreciation, or at least "Well, that's just how you do it when you're Greek, I suppose." Is it because slipping off to Chrysostom's Constantinople is in some way better than galavanting off to Gregory's Rome? Or do Westerners acknowledge a certain timelessness of forms to the East that they don't grant in turn to their own traditional Western forms?

The practical question is then: Are folks willing to trust that Traditional Mass goers can identify their own perceptions and reactions? And if so, then people need to let go of the temptation to guess at the motivations of Latin Mass attendees (nostalgia, museum going, live-action role playing, etc). I keep hearing that "the Church needs to be a Listening Church", and I think a good mark of that would be listening to traditionalists about their experiences and choices and not presuming about what their aspirations are.

I know for me the draw is having a moment when the relentless drive of time seems to pause, and the worries of the day melt away, and where I can find a respite from change, busyness, and noise here within the timeless bounds of the Latin Mass. 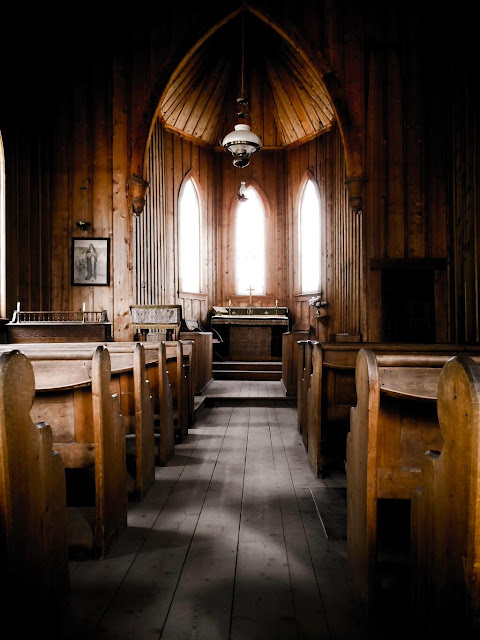