Isaiah Chapter 40 is the prophecy of "one announcing in the wilderness 'make ready the way of the Lord!'" It is also the beginning of the Book of Comfort, the second half of Isaiah's prophecies.

So, after parishioners started downloading the new parish app but before I took them on a tour of it, I talked for about six minutes about this passage and about the song "Comfort, Comfort O My People" which is a beautiful hymnification of the text. As I have in the past, I gave a shout-out to Protestants for writing great hymns that we can borrow, since Catholics are still new to the church hymn biz.

Editorial note: the audio has two lines missing that are in brackets [ ] in the text. No technical error here; I just missed the lines at the 9:00 Mass and it would've been messier trying to go back and restate them once I noticed.

This is the Second Sunday of Advent.

The first week is kind of a fake out.

We do the violet and the candles, but the readings are very much focused on Jesus’ second coming and our being ready for the Final Judgment.

The second Sunday still has many of the Second Coming overtones, but the readings have shifted somewhat.

They still definitely aren’t talking about a baby boy in swaddling clothes lying in a manger yet, but they are announcing the coming of the Messiah.

In fact, the first reading—the beginning of Isaiah 40—is laying out the prophecy that John the Baptist will fulfill in the gospel, in Mark ch. 1, as he announces the coming of the messiah.

So Isaiah is “announcing the announcing”.

Isaiah is writing some 700 years before Jesus, and he’s writing to give the people hope.

Notice what’s happening then. There are 3 time frames:

John is telling that them the Messiah is coming now.

And we are reading both accounts, which for us then is both retelling what happened in Judea and foretelling what will happen at the end.

And that’s the thing about Advent.

In Advent we are scooped up and dropped into the place of Israel and we take on their sense of anticipation and waiting.

Each year we play a game of partial amnesia and we let ourselves forget that we the know the story and how the ending is going to go.

It’s like when you settle down to watch a good movie you haven’t watched in awhile.

You hit a mental reset button and let the story unfold for you again.

But in this case, it’s not just letting Isaiah get us hopeful and the evangelists tell us about the coming at Bethlehem,

It’s because we too, long for the coming of Christ—that “middle coming” that Fr. Rowan mentioned last Sunday, between Bethlehem and the end of all things.

We long for him to set things right, and we long to able to receive him when at last he comes.

So Christmas and Advent are never too far away for us.

The hope, anticipation, longing, and joy are still there.

And that’s why all the gospel writers looked back to Isaiah 40 to introduce the coming of Jesus.

It is the hinge, the pivot point, of the book of Isaiah.

Scholars call the first 39 chapters of Isaiah “the Book of Judgment”.

And then chapter 40 begins the second half, “the Book of Comfort”.

It gets the name because, well, compared to Part 1, it’s comforting...

[God reigns, he vindicates, he punishes the wicked nations and protects the weak.

He defends, he heals, he raises up.]

But its name also comes from the very first words of this half of the book:

“Comfort! Give comfort to my people”

One of my all-time favorite Advent hymns is called “Comfort, Comfort O My People”

I know it’s not known well around here but I asked the choirs to add it this weekend so you can hear it.

But most impressively it manages to give the whole of Isaiah 40:1-5, line-for-line in a beautiful 3 verse song.

Sorry, but it’s true. They’re just better at it than us.

All the best church hymns are written by Protestants.

We have 2,000 years of antiphons and chant, but we only started liturgical hymns in the 60s and the we’ve been playing catch up.

The point is, it’s rare to find something that is both perfectly true to the text and that fits its music so well.

“Comfort, Comfort” does that.

And what do those words say?

What should the prophet speak tenderly  to Jerusalem?

Tell her her slavery is over.

Her sins taken away.

Peace and protection instead of war and bondage.

Are those things only longed for in the 1st century?

Or the 8th century BC?

Did only they long for the wrong to be set right, for sins to be removed, and wars ended?

Then the next verse of the song takes up Isaiah as Mark will quote him:

A voice in the desert, crying repentance.

Change what you’re doing, make ready for the Lord.

Change the world itself for him.

You humble valleys lift up!

You proud mountains bow down!

You crooked ways straighten yourselves!

He’s telling the terrain to straighten itself out, but I think we know who really needs to change.

I think we know which lofty things need to bow down humbly,

Which despairing things need to rise up,

Which odd things, twisted things, need to be set straight.

Finally the last verse of the song, which is verse 5 of chapter 40,

These lines by Isaiah are all but forgotten in modern readings, but they are the whole point of the chapter:

The glory of the Lord shall be revealed.

He shall come on this new highway toward us.

And all flesh, all peoples shall see: The promises of the lord are kept.

And in the season before Jesus came

And in our day too.

So like I said: we are put in the place of an expectant Israel.

So there’s not 3 time periods

There’s not even just 2 peoples:

all of Israel and all those since Jesus

There’s one Lord, and whether we await his coming the first time, or await it now, we are all part of the same people, the same anticipation. 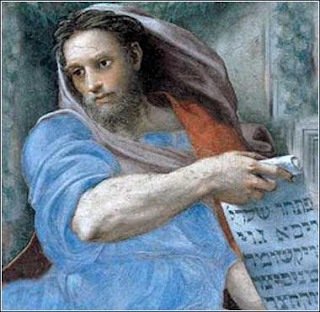