Reflecting on Christmas, closing out the year, wrapping up thoughts on worship... All these things are united under the idea of admirabile commercium, "the wondrous exchange", God becoming man so that, in some way, man might become God.

This homily is a little odd in that I walked over to the altar for the last third of the homily to demonstrate some points while I talked. On the audio you will be able to notice when I am facing the altar (where the recorder was) and when I was facing the people. In the text, those differences are shown by the typeface. Also, there are little ⬆⬇ arrows at one point reflecting where I was making an up or down hand motion.

Today I want to talk about Christmas stuff.

But actually, I think Catholics get very little reflection on the mystery of Christmas, the power of the Incarnation, the spiritual importance of Christmas in our homilies.

Since 1969, the Sunday after Christmas Day has been celebrated as the feast of the Holy Family.

But see what often happens:

Let’s walk backwards through the Christmas season and think about what you hear.

It ends at the Baptism of our Lord in early January, and the priest probably isn’t going to be talking about Christmas.

Week before that is Epiphany, and we’ll hear about gifts and Magi.

Before that is Mary Mother of God, which is the octave day of Christmas, but most homilies are about Mary.

Holy Family is the Sunday within the octave and we hear usually about the Holy Family, or families in general.

But most priests strive to make those Christmas Day and Christmas Eve Masses very accessible.

We know that there are people there who only come a few times a year.

So, for example, even last year when I was somewhat theological, reflecting on “Keep the Mass in ChristMass”, it was still crafted to be “newcomer friendly”.

So the point is: we don’t very often dig deep into Christmas in homilies.

I’ve said it before and I will say it again: if you want to know what a holy day is about, look at the preface.

And again, the preface is the part right after the “Lift up your hearts; We lift them up to the Lord; Let us give thanks to the Lord our God” and before the “Holy Holy Holy”.

So I want to draw your attention to Christmas Preface III.

I wish it was in your missalettes so you could see it too. Alas.

It talks about giving thanks through Christ our Lord and then “Through him, the holy exchange that restores our life has shone forth today in splendor”.

I want to highlight one word there. This word is the key to everything: Exchange.

We think of Christmas as just a gift, but the Mass itself is insisting that at Bethlehem there was an exchange, a trade off.

The word in Latin here is “commercium”, literally whence we get our word “commerce”.

But it’s not just “commerce” as in business, but any sort of trade or exchange.

So what’s the exchange?

I’ll let the preface answer that:

“Through him the holy exchange that restores our life
has shone forth today in splendor:
when our frailty is assumed by your Word
not only does human mortality receive unending honor
but by this wondrous union we, too, are made eternal.”

So, our fragility is assumed by the divine Word, the second person of the Trinity. And the preface says that when that Word is made flesh:

You notice my hand motions there, trying to show the two-way street of the exchange, the commercium.

Even though both are gifts from God, there are two directions to it: Something coming down and something being taken up.

The incarnation, the Word becoming flesh, God-made-man: this exchange seems almost crazy—it seems weird that we are “made eternal” by him joining his nature to us, but even stranger things have been said.

In Second Peter, chapter one, St. Peter himself says: “So that through these great promises you might become partakers of the divine nature”

And even more bluntly St. Athanasius says : “God became man⬇, so that man might become God⬆”

Now, we know that we have to qualify the statements. We know that the incarnation and even Baptism doesn’t make a cease to be human.

But in a real way, by God adopting us in his Son, He has made us sharers in His divine nature.

God became man⬇, so that man might (in some way) become part God⬆.

The exchange is what the saints and singers called the admirabile commercium, the “wondrous exchange”.

Admirabile is obviously related to admirable and admiration, but our modern meaning of those isn’t the same.

It’s more like the idea of wonder, awe, amazement.

Even awe-some or amaze-ing probably fall short because of how we use them today: “Awesome! Amazing!”

Awe-full, as in the sense of “awe-filled”, “filled with awe”, might come a little closer. But…

There is even a 16th century Christmas song, O Admirabile Commercium, about this:

“O wonderful exchange:
the Creator of human kind [...]
assuming a living body,
he lavished on us his divinity.”

So that’s the heart of the Christmas mystery

But that idea of wondrous exchange doesn’t stop once he’s born.

The whole Christian mystery is this downward and upward, upward and downward motion.

God creates⬇, and his creation gives him praise⬆

The people of Israel cry out⬆, and God responds with saving action⬇

The whole of Christian worship—because it’s literally us being joined to the worshiping action of Jesus—is doing this cycle of give and receive, up and down.

We confess our sins⬆; forgiveness and peace come down⬇

We bring our cares, worries, and prayers each Sunday⬆ and lay them at the foot of the altar, and each Sunday we are filled up at the graces to go out again and face the week⬇

This is the marvelous exchange.

It’s the pattern of creation and redemption,

It’s the pattern of our worship and prayer,

It’s the pattern of our Christian apostolic life.

I want to wrap up by showing you one super-concrete example of this that you couldn’t really perceive until we started saying the Eucharistic prayer ad orientem this fall.

<<For the following section, I had walked over in front of the altar. The parts in bold are when I turned to and was facing the people; the parts with regular font are when I was facing forward, ad orientem, toward the altar.>>

So, between the Offertory and Communion, while the priest is at the altar, he’s mostly facing away from you and toward the God the Father.

But during that period there are three times he turns and faces the people, which itself is a little visual image of the commercium, the exchange.

Those are the times he stops talking to the Father and talks directly to the people in the congregation.

Now, perhaps some of you have noticed that the priest usually turns clockwise out to face you, and then usually returns back to the altar counterclockwise.

And perhaps a few of you have noticed that there’s one time—and one time only—when he doesn’t do quite that, and that’s at the end of the offertory, right after he has first presented the bread and wine, and when he invites us all to:

“Pray, brethren, that my sacrifice and yours will be acceptable to God our Heavenly Father”

He turns out, says the line, and keeps on going the same clockwise direction back around.

So the priest is turning to the people, collecting all of their prayers as it were, and asking them to pray with him that we might bring a worthy sacrifice to God…

And then, almost as if he’s scooping up all of the prayers from the people➡, he then brings it back around, with his arms full, back to the altar.

That was cool for me to learn. That made total sense it was just a great image.

But of course as we’ve learned in this homily it’s never just a one-way road.

There’s always an exchange. There must be a moment of return.

So the priest gathers up all of our prayers and offerings and takes them to the altar. And then—the priest through Jesus’ power, and Jesus through the priest’s hands—we together praise and worship the Father facing forward.

All through the Eucharistic Prayer we stay facing this way, all through the Consecration, and in the Our Father too because we’re all praying together to the Father…

...So then, when is the first time the priest comes back around? When does he complete the exchange?

Right after saying the prayer “Look on the faith of the Church and graciously grant her peace”, he turns and again with open hands says “The peace of the Lord be with you always.”

It almost feels like he’s flinging this peace out into our hearts.

The priest with open arms scooped up all our prayers, took them to the altar; they along with the gifts were transformed, and now he turns and pours out the peace of the Lord upon us.

And then look what happens: he turns back the altar, not to say anything else but just to break the Host, and then turns back to the people again holding up the Eucharist saying, “Behold the Lamb of God…”

Like he’s saying “No, really. I meant it about that peace stuff. Here he is: the Prince of Peace.

We brought our bread and wine here and God exchanged it for the body and blood of his son.”

And then to complete the downward action, the priest gives the Host to the faithful, and the faithful go out into the world.

So now I feel kind of like the kung fu teacher who says, “There is nothing left for me to teach you.”

Once that realization about the second half of the circle of the divine exchange had sunk in for me a couple weeks ago at Mass, I knew that was the perfect way to finish out this year in which from time to time we have really focused on our worship.

Not only is the circle of exchange at Mass complete, but now we have seen it, and that completes the cycle of lessons on how we worship.

I feel kind of like Simeon who can say now “Lord, now you let your servant go in peace.”

If I’m gone tomorrow, I feel that I’ve giving you what you need to get the most out of Mass.

So as we wrap up this year, let’s take what we have learned and go forward.

Now we see very concretely the exchange. It was always there—even when we faced each other, the wondrous exchange was the key to Mass—

But now we can really see: we bring all we have to God; he transforms it—bread, wine, praises, and petitions—and then gives that back to us in spiritual graces and the physical Eucharist to get us through our days. 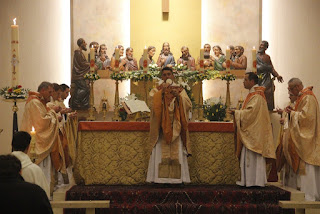